Urban Evolution site specific performance from Mark Kammerbauer on Vimeo.
Cities are examples of how building, destroying, and rebuilding occur over and over again. Such processes that can be triggered by crisis, disaster and other societal, political or market phenomena or actors. However, how can such processes become an experience to be perceived by others? Urban Evolution intends to answer this question within a performance in public space on the Theaterplatz square in Weimar, Germany, developed in the context of a research project at the Bauhaus Universität Weimar. By doing so we reimagined a quasi-historic process of cycles of rebuilding, demolition and rebuilding again and again that remains invisible unless some sort of signs indicate this process. European cities may actually be a case in point, considering wartime destruction and postwar modernist planning schemes that drastically altered historic cityscapes. Yet, while physical or social traces may remain, the context was hardly the design of memory or history as a creative practice, and the resulting void was coincidental. Therefore, there is a need to go beyond such examples and research whether transferable models of such processes can be established to better understand their design relevance.
The Urban Evolution performance consists of different steps including movement, climax and void. These steps are indicated by signs of their occurrence – „scar tissue“, perhaps – that are marked on the surface of the square with chalk. Structures measuring 3.5 x 3.5 x 7 feet made of wood frame lined with cardboard are „manned“ by one person each who moves them from the inside along the square. Chalk tracings are drawn on the paving from inside the structures. The structures move in steps towards a climax of maximum density – a speculative pre-existing condition. They then withdraw from the square completely, laying bare a resultant condition of removal as a post-event situation. The spatial void becomes complicit to the documentation of its appearance as the chalk signs marked on the surface of the square indicate the action of removal, until rainfall washed them away. Within the Urban Evolution performance, the void becomes perceivable as well as the action that preceded and generated it (Javier Barona, Mark Kammerbauer, Arne Löper).
at April 21, 2019

A year ago I recorded a bass feedback session at the Bunker, Blumenstrasse, Munich. It will form the core of new Fragment King recordings te... 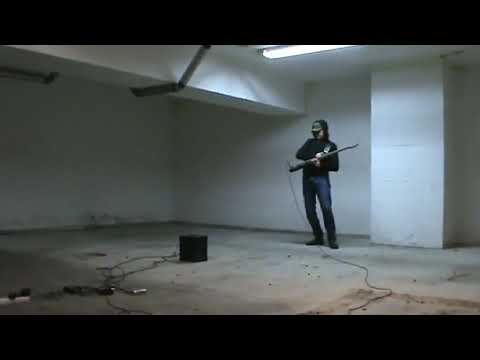